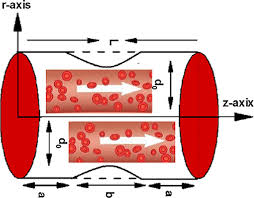 Abstract: The problem of flow of a visco-inelastic Reiner-Rivlin fluid between two enclosed discs has been considered in different cases of rotations. The flow functions  and  are expanded in powers of flow Reynolds number  (assumed small). The effects of cross-viscous parameter  and ratio of angular velocity  have been discussed and shown graphically in cases of outflow and inflow for recirculation and no-recirculation.

Visco-inelastic Reiner-Rivlin fluids occur in industries under conditions, which arise there. A common feature of this class of fluids is that when at rest they are isotropic and homogeneous and when they are subjected to shear, the resultant stress depends only on the rate of shear. However, this sub-class shows diverse behaviour in response to applied stress. The flow pattern generated in a homogenous fluid confined between two rotating discs has draw the attention of several authors notably Srivastava A.C.[1] has studied the flow between two rotating co-axial discs. Soo S.L.[2] has discussed the laminar flow over an enclosed rotating disc. There after Sharma S.K.[3] has discussed the same problem of flow over enclosed rotating disc with improved formulation. Sharma H.G. and Gupta[4] have discussed the problem of flow of a non-Newtonian second-order fluid under an enclosed rotating disc. Recently Singh K.R. and Subhi Singh[5] and Singh K.R. and A. Kumar[6] have discussed the problem of flow of Reiner-Rivlin fluid between two enclosed torsionally oscillating porous discs and counter rotating discs respectively.

The purpose of the present problem is to discuss the flow of visco-inelastic Reiner-Rivlin fluid between two enclosed discs in different cases of rotations as follows:

Case-I:         The lower disc is rotating and the upper disc is stationary.

Case-III:       Discs are rotating with different angular velocities in opposite sense.

2. FORMULATION OF THE PROBLEM

The constitutive equation of an incompressible Reiner-Rivlin fluid [7, 8] can be written as:

is the hydrostatic pressure,  is the stress-tensor and  is the velocity vector. We have taken  (cross-viscosity) in place of  to avoid the fraction coming in the value of . The equation (1) together with the momentum equation for no extraneous force is:

and the equation of continuity for an incompressible fluid is:

where  is the density of the fluid and  represents covariant differentiation, forms the set of governing equations. In the three dimensional cylindrical set of co-ordinates , the system consists of two finite discs of radius  (coinciding with the plane  and ) rotating with different angular velocities as per different cases of rotations. Both the discs are enclosed and are forming the part of a co-axial cylindrical casing. The symmetrical radial steady outflow has a small mass rate  for radial outflow and  for radial inflow. The inlet condition is taken as simple radial source flow along the -axis starting from radius .

Assuming  as the velocity components along the cylindrical co-ordinate system of axis , the boundary conditions of problem in different cases are:

where the gap  is assumed small in comparison with the discs radius . The velocity components for the axisymmetric flow compatible with the continuity criterion can be taken as:

Using expression (6), the boundary conditions (5) are transformed into the following form:

The conditions on on  the boundaries are obtainable from equation (7) for  as follows:

which on choosing the discs as streamlines reduces to:

Using equation (1) and expression (6) in equation (3) and neglecting the squares and higher powers of  (assumed small), we have the following equations in dimensionless form:

is the Reynolds number based on the gap length

are the kinematic viscosity and cross-viscosity respectively 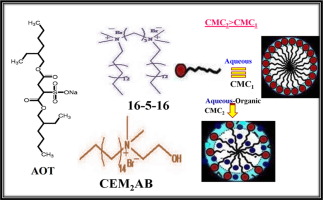 Studies on the Solvent Effect of DMSO 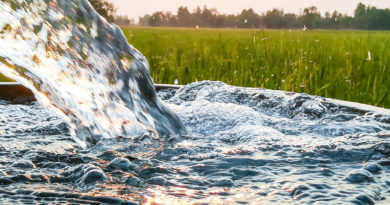